How to use topo maps and gold maps to find gold

I thought I’d come by and give you a little bit of a detailed explanation of something people have been asking me about.

And that is the relationship of topo maps, contour lines, and gold found in gold maps.

So let’s take a look.

Starting with your lode source, which you can find using a gold map or historic mining information. Or just plain pick ‘n shovel, take your pick.

The objective is, you wanna find out where that gold is. You also wanna find out where it might concentrate in other places. And between those two points is a thing called a gradient, that’s this slope. The gradient, basically, is formed when you look at each of these horizontal lines, they are at the same elevation. So each one of these represents a contour line along the same altitude above some base line, like sea level. 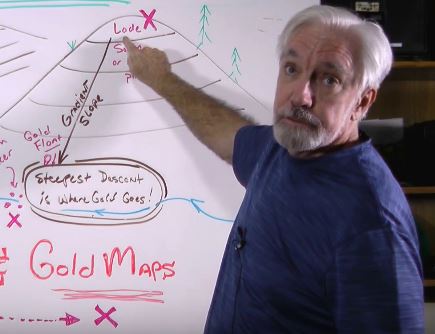 Gold rolls downhill, like some other things. So the idea is, when it moves downhill, it’s going to find another place where there’s an intercept where it can no longer go downhill further, and it’ll change direction, and follow perhaps a stream line. Something that would push it, water. But in this case, gravity plus water. In fact, in both cases, gravity’s what’s really the moving agent here. Water is kind of like the thing that propels it, but the gravity is what’s providing the force.

So, once you have these various pockets that form, you can exploit them in other means. And we won’t go into that in this little short video. But the thing you want to look for is this steepest descent concept. That’s what’s shown by the topo map. The origins and destinations, they’re shown on your gold maps. And I talk about that in Gold Maps, Government Gold Maps, the video and the PDF series.

I wanted to give you one more little tip. If you see a dimple, like some dents in the side of a mountain, you know, something that came in, and a meteor impacted it, it’s worth investigating, especially with a metal detector, something like that. That could be a swale.

Basically, a swale forms for a variety of reasons, one of which could be the degradation of gold ore such as chalcopyrite, which releases sulfuric acid when it’s at the water table, right at that boundary where there’s oxygen above and water below, you get the interaction of the sulfur and that pyrite that creates sulfuric acid, it eats the quartz and leaves the gold.

Guess what gold does?

It goes downhill with gravity, concentrating as that quartz erodes into a pocket placer. The only thing you might see is a little tiny dimple on the side of a hill, you know, a bucket, a bowl if you will. Not man-made, but something kind of natural and, but kind of weird. Because you wouldn’t normally expect to see a dent in the side of a hill. You’d expect to see something more like this, where you’d get a crevasse or a canyon flowing down from water erosion.

When you see these, investigate them, ’cause you could have a pocket placer where the gold decayed in place over tens of thousands of millions of years, and you don’t know it, but you’ve got this huge bucket of gold. It’s easy to get to, ’cause it’s not very deep.

Remember, this is where the water table was when this thing stopped getting eroded. So the gold isn’t going to go very much further down from that. So that’s another tip.

This is Prospector Jess, over and out