I’m gonna talk a little bit about Newton’s law of motion or F=ma, force equals mass times acceleration. Or another form of it is acceleration equals force over mass.

What’s that got to do with rocks?

Well rocks are masses. And acceleration, well that means that’s the gold flying out the back of your sluice box. I’m gonna talk about that in a second. To some of you this may look familiar. 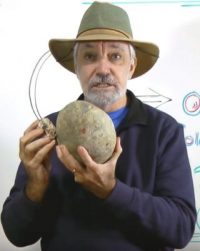 The idea here, though, is very simple. You have a rock like that, and you have a rock like this. When the two of them come together, even though they’re made out of almost the same material, in terms of their specific gravity. When this big rock comes along and smacks this little guy, he is going to go bang!

And that bang basically imparts momentum into this, or acceleration. So this rock speeds up, the small one does. You’ve seen this with cue balls in a billiard game.

So the idea is, if we look at what we have, take a more moderate size pebble, this guy is more like that big huge boulder was. So when it smacks into this rock, it’s going to speed away down your sluice box. Poof.

So, how do you prevent that? 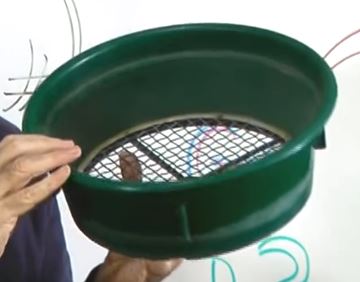 I recommend a half inch in general because it’s a good size to go through things quickly. It doesn’t get plugged up, but it will sift everything half inch and lower out through the bottom and that can go into your pan or your sluice box.

Now, I like to have a half inch and a quarter inch with me at all times. The smaller gauge will sift out smaller particles of gold more readily, but they tend to get plugged up if you get too small for the kind of material you’re finding and it takes a lot longer to process.

Once you sift it, you put it into your pan, for example, and sift the material into the pan. You can do it dry or wet. One of the problems is if it’s moist and you have larger particles in a small gauge sluice, it becomes very hard, it can even plug up. So you have to have the right amount of material or you have to sift it wet, take your pick.

A large version of this, you’ll see on trommels and dredges, is called a grizzly. And all it’s doing is acting as a classifier sieve for particles that are smaller than the hole size that’s in it. The other material flows on downstream.

That material that goes downstream is going to be your lighter weight material. The stuff that’s gonna get dropped through contains your gold. That’s the objective here.

It doesn’t take but a couple seconds, sweep over. You flatten it out, you sweep over it and if it beeps, then you separate it out.

If it doesn’t, don’t worry. And generally, you’ll find out most of what you have is leverite. Leave ‘er right there.

Prospector Jess, over and out.

Core Sample from the Homestake Gold Mine

How to use topo maps and gold maps to find gold