Where Is Gold Found In New Mexico?

Hey, this is Prospector Jess from Hunting4Gold.com.

I’ve got a little bit that I want present to you about New Mexico. I was asked recently a question.

How do I find gold, or is there gold, in southern New Mexico?

That’s a really good question. So, I’m gonna take you to New Mexico, that’s this fine state right here, it’s a great place to go visit. I’ve spent many summers in Santa Fe, but there are some nice gold prospecting areas across the state, pretty much diagonally, and I’m gonna be discussing kind of a little bit quick tour on where some of the places are.

We won’t have time to go in to much detail, so I’m gonna make this a quick flight. Starting in New Mexico, you can kind of get the gist of where it is, and then we’ll go to a little bit of a discussion about where you can find information about gold.

One of the first places you can go to is the USGS has a survey of placer gold deposits in New Mexico for free. This is a 50 some odd page document that you can pull down from this location right here, and keep it for yourself.

But what it covers is a pretty useful list of places for gold that’s been found county by county in New Mexico. And that you should always avail yourself of this kind of material. A lot of it is pretty old stuff, but you know what? Gold is gold, and where it’s been found is where you’re gonna find it in the future. 33 placer districts in the state of New Mexico estimated to have produced 661 thousand ounces. Now that’s when this thing was produced, and that was from 1828 to 1968.

So, you can see in 1828 they found gold, but the basic statement is the gold was actually discovered by the Indians and the Spaniards, when they were working their way through New Mexico. And so it was that that led Coronado up through Mexico into New Mexico and on up, looking for gold. It’s important to know there’s a lot of history that goes with these places.

I have an opportunity in the future, I’m gonna talk to somebody who’s an expert on New Mexico, he has a couple of mines in that state, and you know, it’s really important to know what you’re looking for.

Remember, whenever you go out and prospect for gold, or look for a gold site, make sure that you have prospecting rights where you’re looking. You can easily get in trouble with claim jumping if you don’t. So that’s just a word of note I wanted to caution you about. Anything I show here, you need to also investigate whether or not you have access. Because, essentially if you don’t, it’s either private property, or it’s public property with limited rights. And you need to know what that means.

So, another thing to look at is the New Mexico Bureau of Geology and Mineral Resources. There’s a frequently asked questions list related to mining, this one’s about uranium, but there’s a lot of material in here on gold. In fact, they have a really cool article you want to pull down, another 16 page document, on places you can go gold panning. And so, again, it talks about where you can find and what locations, important tools to take in the desert, and stuff to survive with, because man it gets hot. So, keep that in mind.

This is gonna be a quick tour. That is at this location, geoinfo.nmt.edu. The New Mexico Bureau of Geology and Mineral Resources. So, Streetwise Reports gives interesting survey, this is January of 2017, so it’s pretty recent stuff. Some drilling on a southern silver project, and they’re pulling up gold oxides and silver oxides, and copper.

This is all part of the big copper districts coming out of Arizona. They go all the way down into Mexico. But this stuff basically is showing that there’s a fair amount of gold in southern New Mexico, south western even. Now, a lot of this stuff is mixture of gold and copper, but it’s worth paying attention to, that they’re finding gold systems, and they’re finding them right now. So, it’s a worthwhile expedition.

So let’s take a look, we’ve done this thing with the mineral resources data system, and we’ll pop on over to that in a second. And I wanted to pull up another map that I had done, basically showing that there’s a ton of mines of all different sorts throughout New Mexico, it’s a very rich area. 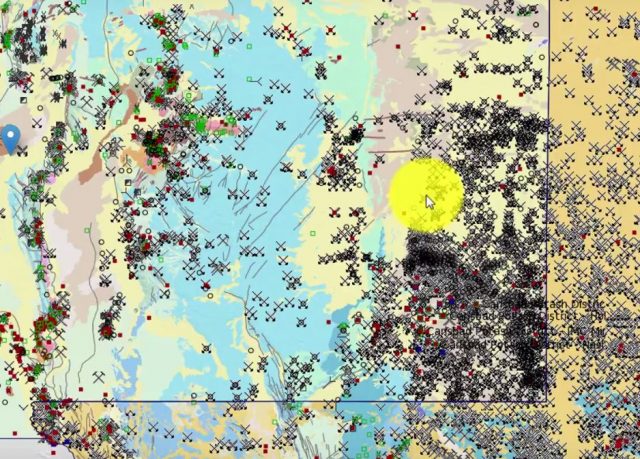 This section over in here is of particular interest, because remember, we often don’t think of it this way, but when you drill for oil, you’re mining, and you can see all of the oil activity going on over here. It’s fascinating because in this central section of West Texas and New Mexico, this area is having a huge revival in oil drilling. And the reason is the fracking business. They’re pulling out oil like never before, enough to export to other countries, and putting OPEC on notice.

So, it’s something to pay attention to. We don’t think of oil as a mineral, but it is. I am pulling down Mineral Resources from New Mexico, and let’s take a look at what that looks like.

So, here’s the Google Earth of New Mexico, with gold prospects laid out. Now, these purple things are my infamous platinum prospects, basically I pulled those out to demonstrate the different kinds of things you can pull out, but you can find platinum, gold, and silver right here out of the Cuidad Juarez area. Whenever you find something like that, there’s likely more of it in the region.

These are all prospects, if you have the picks upright like this, it means it’s an active mine. And so again, going back to what’s in the mine, well, fluorine, fluorite, gold, silver, copper, etc. So there’s lots of gold down in this area. What you need to know is where to look.

Placer Gold and How to Find It, Part Seven

How To Find Gold Using Geology and Topology