For right now, what I wanted to talk with you tonight is gold and rock indicators. And specifically, I’m going to go over here and switch out things a bit, stumble along. And talk to you a bit about what are gold and rock indicators. Specifically, there’s some physical characteristics that are worthy of note. I’ve spent some time talking recently at a couple gold shows and talking with people online about this concept of physical characteristics and how important it is to understand this. And in doing that, I ran into some people who would like me to do some more material on this. One of the things I’d like you to be able to do is give me your top questions on what you’re looking for when you’re looking at rocks and how they relate to gold. That helps me put together some ideas to explain this better in the future. 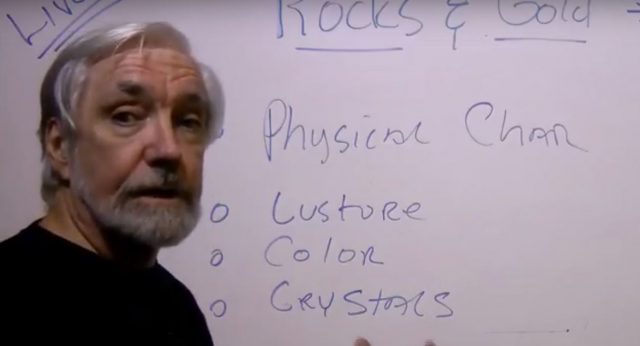 Right now what we’re going to be talking about specifically has to do with the character of the rock and the minerals in it, as well as the formations that they’ve made. I’m going to put my headphones down. When we talk about characteristics, we’re talking about things like luster, color, crystals. These physical characteristics make up some important things to watch for when you pick up a rock. You don’t want to just look at the rock and say well that’s just a nice piece of rock, or that looks really exciting because that’s got lots of color. You want to know how the colors relate to the potential for gold and the kinds of minerals that go with gold. What you’re likely to find is not so much the gold is you will find the minerals that go with gold, and I’ll be talking about that in a minute.

What you’re looking for are the kinds of things that have the right properties. They might have magnetic properties, they might have certain properties with respect to chemistry or pH. They also might have certain properties with respect to the kind of material and fracture that it has. It’s basically how the mineral structures in it break up when you apply pressure to them. Different minerals break along different lines. Some have nice crystalline structures and platy. Some break along what’s called concoiled, they’re curved like a piece of glass breaking. And somethings have this property where they basically will break along a specific line. Or somethings won’t break at all, they will just kind of crumble and fall apart. All of those things, all of this characteristics and more, which I won’t have enough time to go into tonight, give you the information you’re looking for when it comes to determining the kind of material you’re dealing with and how to look for gold.

What we want to do here is just give you a little teaser on that. I’ve talked about this at great length in the past. For tonight what I want to do is kind of just give you a little bit of a teaser. These are some rocks that I’ve collected over the years that have certain properties I like to point out. This one, for example, is a piece of quartz. You can see it looks kind of grungy and rounded. Grungy and rounded when you find this as kind of an oval or elliptical piece like an egg in a river, would tend to indicate it’s been there a while. White tends to indicate it’s full of quartz. If you break it open sure enough it’s got all these shiny crystalline facets. And notice they’re broken like glass, they’re concoiled. That’s a sign of quartz. But also notice the deep coloration along the edges. That deep coloration is what I was actually look for, because that’s an indicator especially if it’s rusty red. Or if you just found it after a big flood and it came down out of a mountain and was blue, a deep blue. That’s what the blue lead or tertiary quartz’s were all about. And they were typically loaded with gold.

It’s the kind of thing you start looking for these because they’ll lead you to load elsewhere. They’ll also lead you to some pretty good nuggets in the local area. You might also find other minerals that have interesting dark patches. They look kind of grungy and when they’re broken open they have these dark patches. Manganese, it’s another mineral that’s known to go with gold. Keep your eyes open for that. You might also run into things from time to time that look like a big ball bearing. This particular one has not as much heft as that piece of quartz does, it’s not as dense. It also has kind of a funny texture like it was ablated. That’s a funny term for run against a bunch of hot air when it came out of a volcano. This is a little volcanic bomb. That’s different from this one, which has this nice crystalline structure and looks like it’s full of what looks like silica and some other little pock marks, that’s a geo.

All of those add up to a signature that you can use as an indicator. That’s what I mean by indicator, it indicates that gold is in the region. It’s not necessarily that that is gold. In fact, usually it’s not a characteristic of gold at all. Here’s another one, nice deep red, full of quartz, but that’s a piece of leaverite. Why, because it’s so heavily loaded with rusty quartz that there isn’t any gold in this area. Nearby there are some that are almost black, those guys have gold in them. But this particular region had mostly rust, which meant it was mostly iron sulfides, pyrite. That doesn’t mean pyrite won’t come with gold, take a look at this piece right there. This is a nice piece of rainbow calico pyrite. Let me show you these on the other camera because it’s easier to show them and then we’ll move onto your questions.

Here’s that piece of calico pyrite, let it shine on there. Notice the rainbow colors to it and the kind of glossy almost coppery gold color. That’s because this is copper sulfide. But that copper sulfide because of its physical characteristics can combine with gold, let me focus it for you. It can combine with gold in a continuum that allows you to pull up to 10-20% gold by weight out of this ore. It’s not necessarily that all fools gold is foolish. This stuff would definitely be worth mining, and is. Keep that in mind as you’re looking at these kind of ores. Here’s another piece right here. It’s magnetic in its nature, high in iron, but it happens to also because of its magnetic nature to ultramafic and it goes along with gold. Here’s a piece of magnetite. When you see these things in the bottom of the river and they’re heavy and dense, they form and they collect down where gold collects as well. All of that is an indicator for the potential of gold. That’s the kind of thing we’re going to be looking for when we talk about indicators.

How To Find Gold Using Geology and Topology